The types of Cooling Towers and Ponds come in many forms, sizes, and prices, but all have the same purpose, to act as a heat rejecting device to transfer, remove and eject heat from an industrial process or a building air conditioning process before recirculating the cooler water back into the system.

They are generally called ‘evaporative coolers,’ and below, we provide a high-level description of the following:

Ponds are generally covered by the simple lake type ‘cooling pond’ or a ‘spray’ type pond.

What are Cooling Ponds?

Cooling ponds are usually big bodies of water that would appear more like a lake or large pond. They traditionally are used to process and cool the warm water created by an industrial process such as:

The cooling process is achieved via warm/hot water from the process being pumped into the pond, which then will be allowed to flow naturally to allow cooling via radiation, evaporation, and conduction before being recirculated back into the cooling system via the system pumps.

Due to the heat transfer inefficiencies by using this method, a large water surface is required.

They also note the following disadvantages:

How do Spray Ponds Work?

Using no mechanical fans, spray ponds are an alternative design that utilizes nozzles mounted a few feet [1.5m to 2.0m] from the water surface of the pond/basin that atomizes the warm water received from a process to increase its surface area and contact time with the surrounding air.

This boosts the efficiency and available cooling performance of the equipment.

The warm water enters via the nozzles and is recirculated back to the system by pipework connected at a low level to the pond basin.

Like with the cooling pond, they are commonly used to process and cool the warm water created by an industrial process such as:

The following advantages can be gained by using the Spray type tower.:

Alternatively, the disadvantages are:

Cooling towers can be broken down into 2 main types of designs and 2 sub designs:

Mechanical draft towers will incorporate a mechanical fan to create the airflow needed to ensure evaporative cooling takes place, removing the unwanted heat, in turn, lowering the temperature of the water before being pumped back into the system.

Designers of building services systems will generally use 1 of 3 types within their designs:

The differences are straightforward between cross flow and counter flow cooling towers and can be summarized as follows:

What are the advantages of a Cross flow cooling tower vs Counter flow?

What is an Induced Draft Cooling Tower?

An induced draft tower is constructed with a tall stainless steel casing [square or round], with axial fans located at the top, pulling air into the tower that enters via the side.

The external casing of the tower, where the entering air is drawn through, will be packed with a material [wood slats or plastic], usually referred to as ‘Fill,’ specifically designed to allow the warm water to flow down and the air through. This is referred to as ‘Cross Flow.’

The reason for the material is to increase the ‘wetted’ area of the tower allowing for more evaporative cooling to occur.

The fill can also be installed horizontally, providing a ‘Counter Flow’ type design as described above.

Once the air has passed through the material, the warmer air will then be pulled up through the fan, mounted at the top, and released into the atmosphere, with the rejected air being warmer and more humid, which is what can be seen as a ‘plume’ sometimes during cooler months from the top of the tower.

The water will be introduced at the top of the tower via pipework from the condenser system and allowed to flow freely through the fill material under gravity, allowing an even water distribution.

There will be a catchment basin at the bottom of the tower to collect the water, ready for pumping back into the condenser system.

Advantages of an Induced Cooling Tower:

Disadvantages of an Induced Cooling Tower:

There are a lot more advantages than disadvantages…

What is an Forced Draft Cooling Tower?

A forced draft cooling tower operates using centrifugal fans to push ‘force’ ambient air through the tower at a low level, helping to remove the heat generated within a production/system process.

Force draft towers generally will only use the counterflow design, as can be seen below.

What is the advantage of forced draft cooling tower?

What are the disadvantages of a forced draft cooling tower?

These cover anything that does not incorporate a mechanical fan to create the airflow needed to ensure evaporative cooling takes place and removes the unwanted heat from the water.

A great example of a natural draft cooling tower is the Hyperbolic type.

After the shape Hyperboloid, a hyperbolic cooling tower is probably the most recognizable shape and type of tower that we see near power stations, but are also used in similar industries to the cooling ponds/spray pond type cooling systems above. 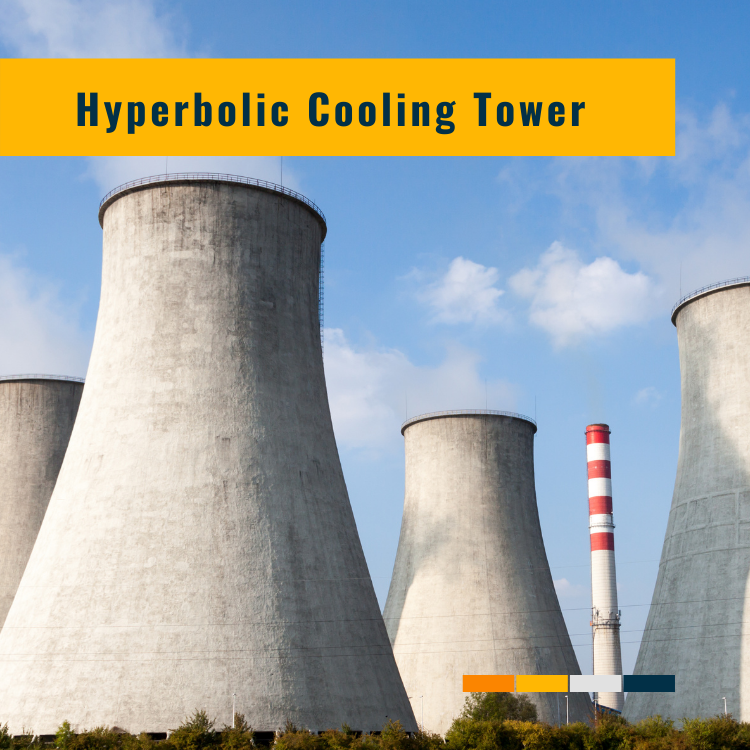 Why is a Cooling Tower Hyperbolic?

The cooling tower is designed and constructed as a hyperboloid shape for a few reasons:

According to Merriam Webster, a Hyperboloid shape is defined as:

Yup… I know… to put simply, if you look at a cooling tower, that’s the shape…

How does a Hyperbolic Natural Draft Cooling Tower work?.

Natural draft towers operate with no mechanical fans; much like the spray pond above, it uses spray nozzles within the tower that introduce the warm water that is to be cooled at a set height to the surrounding air.

After the water has been atomized, creating tiny water droplets will interact with the air transferring its heat via evaporation.

The air will increase moisture and temperature, become less dense, and rise through the tower, using ‘the chimney/stack effect.’

As the air rises, it will draw in cooler air through holes/vents constructed into the bottom of the tower. The cooler air will maintain the process of warming up as it comes into contact with the water, transferring heat, and flowing up through the tower.

The cycle is continuous, as long as there is load and water flow.

Once the hot air has reached the top of the structure, it will move into the natural atmosphere.

The water, once cooled, will drop to the base of the cooling tower, where it will be collected in a basin and pumped back into the cooling system to be recycled.

What is the difference between induced draft and forced cooling towers?

The difference is in the fan’s position; the induced drafts fans are located at the top, drawing the air up through the tower.

The forced draft cooling tower has its fans located on the side of the tower, ‘pushing/forcing’ the air into and up through the tower.

No, cooling towers do not emit CO2; they emit water vapor.

What is the shape of a cooling tower?

The most common cooling tower shape is a rectangle, but most people will see the natural draft atmospheric type that can be seen along the motorways near power stations.

These are called Hyperbolic Towers, which use a Hyperboloid Shape.

No, not necessarily; the byproduct of the cooling process from the tower is water vapor, although there will be some solids [scale, small solids, and debris] that will be flushed to drain through the blowdown process.

What gas is commonly released by the cooling tower?

Cooling towers do not release gas; they release water vapor generated from the cooling process and can usually be seen as a ‘plume’ above the tower.

Under normal operations, cooling ponds for Nuclear Power Plants are safe. The ponds/lakes and surrounding areas can even be used as a recreation center for activities such as:

The following documents and websites were referenced for this article.

COOLING TOWERS | All the 38 components explained

COOLING TOWER PLUME | What causes it?

COOLING TOWER | What is a Sweeper System?

MAKEUP / BLOW DOWN | Cycles of Concentration